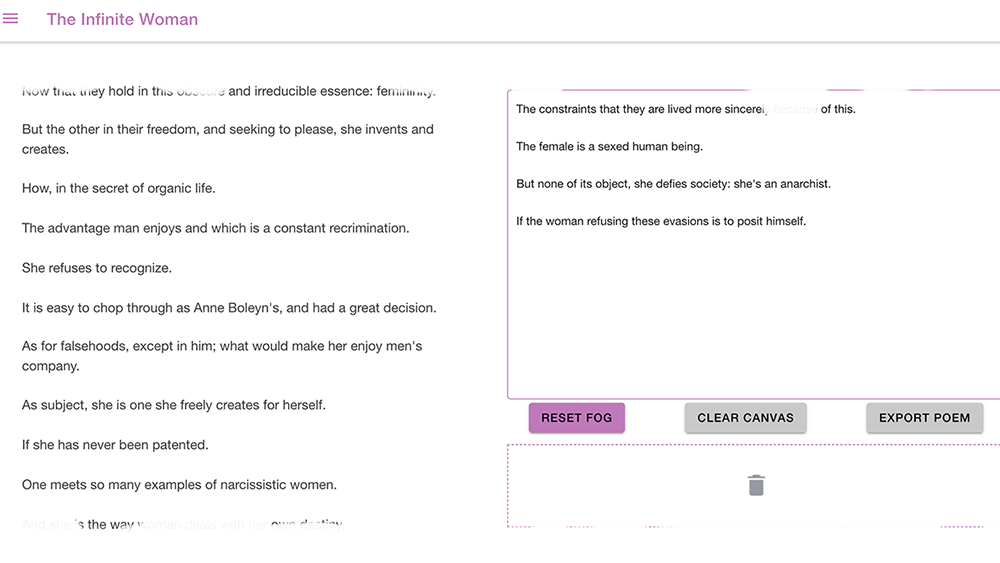 The Infinite Woman is an interactive remix and erasure poetry platform. As a feminist critique and artistic intervention, the web app remixes excerpts from Edison Marshall's novel The Infinite Woman (1950) and Simone de Beauvoir's philosophy book The Second Sex (1949). An n-gram algorithm procedurally generates infinitely scrolling sentences that attempt to describe and critique an eternal feminine essence. Revealing patterns through iterative permutations, this algorithmic remix of Marshall's and Beauvoir's language stretches the logic of “the infinite woman” to the breaking point. Meanwhile, fog slowly obscures the screen, visually performing the concept and technique of erasure. Users can select sentences from the infinitely scrolling text to send to a canvas workspace, where they can create their own erasure poems, proliferating possibilities for deconstructing and reimagining gendered subjectivity.

For the digital review's critical making special issue, I have written a multimodal essay reflecting on the project’s conceptual, aesthetic, and technical development process. In the essay I contextualize my project’s computational extension from my earlier tactile erasure poetry intervention; describe the web app’s collaborative transdisciplinary development process; and theorize the project’s queer feminist algorithmic poetics, lyric post-conceptualism, and experimental UX and UI design. Throughout, I emphasize the intertwining of concept, functionality, usability, and aesthetics.

With my conceptual and creative direction, the cross-platform web app was designed and implemented in 2019 by a team of Georgia Institute of Technology computer science and computational media students: Alayna Panlilio, Ryan Power, Josh Terry, Alex Yang, and Jeffrey Zhang. Since the team spent a semester researching the user experience (UX) and user interface (UI) before they implemented the platform the following semester, my project serves as a case study demonstrating the benefits of UX and UI research to e-lit and DH projects. The team and I prioritized not only functionality and usability but also the artistic affordances of interaction design – carefully considering the conceptual implications of the visual aesthetics and intentionally subverting certain usability heuristics to produce a desired impact.

Complementing the feminist critique inherent to my choice of source texts, my project is also a feminist intervention on another, subtler level: it insists that the surface is just as complex and functionally essential as the system undergirding it. The fog animation and pink accent color visually and experientially perform the project’s engagement with erasure and gender, respectively, while the user’s ability to select, rearrange, and erase text extends the backend algorithm’s invisible remix functionality toward an interactive, visible experience of the process of remixing and erasing text. Just as methods of critical making and critical design refuse the binary of theory and practice, a feminist design practice values visual and interactive aesthetics as not in excess of but key to a project’s concept and functionality.

TDR is hosting the web app, which displays best on a desktop or laptop with the Chrome or Firefox browser. To access it, click the “Begin” button, and then click the image at the top of the page, which precedes my essay.

Katie Schaag is a writer, artist, and theorist making work for the page, stage, gallery, screen, and social context. An Assistant Professor of Theatre & Performance at Spelman College, she was previously a Marion L. Brittain Postdoctoral Fellow in the School of Literature, Media, and Communication at Georgia Tech. She earned her PhD in English Literature at the University of Wisconsin-Madison, with a specialization in performance studies and a minor in fine art and creative writing. Her writing appears in Performance Research, Datableed, Yes Femmes, and elsewhere, and she performs and exhibits her artwork at galleries, theatres, libraries, and museums.