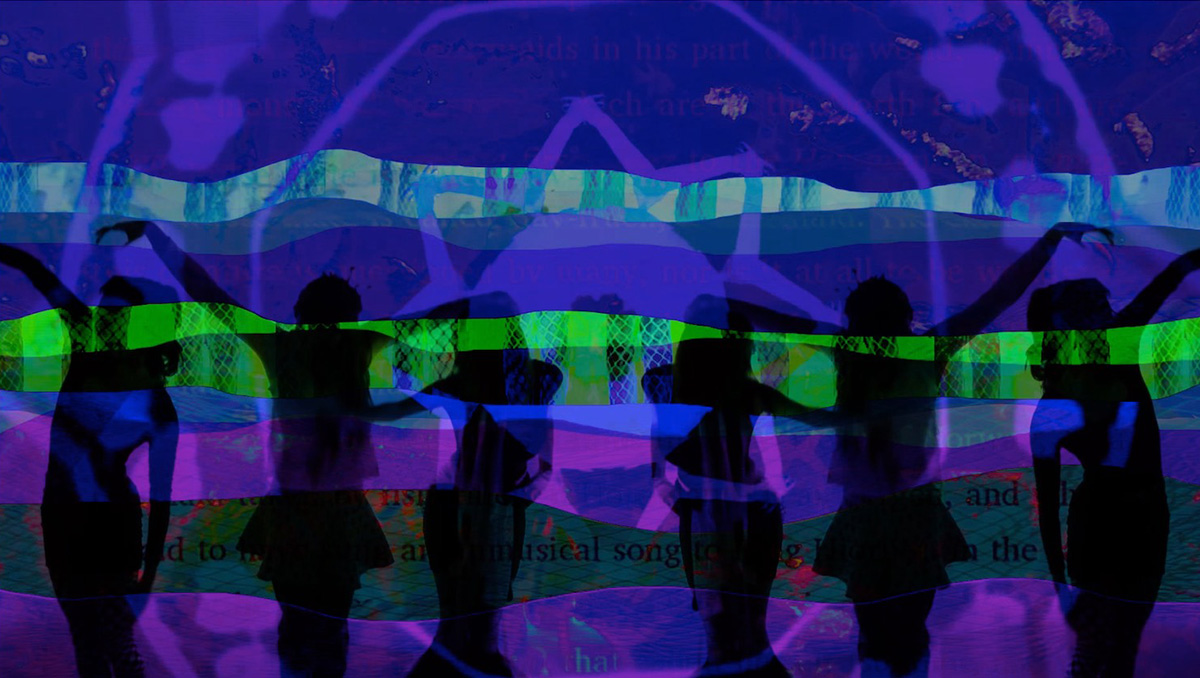 Entanglements: an exploration of the digital literary work of Joellyn Rock and “FISHNETSTOCKINGS" is a Scalar book that explores and enacts an entanglement of critical methodologies and perspectives — focused on race, code, and mermaids — taking "FISHNETSTOCKINGS" by Joellyn Rock et al. as the cornerstone for interpretative immersion. This work emits a siren call that compels readers/viewers/users to immerse and submerge in a multimedia projection of text, image, and dance. The resulting experiential and embodied performance centers around mermaid imagery and narrative, an entanglement of ancient mythos and modern feminist reconsideration that promotes critical attention and appreciation. Under Rock’s direction, the work draws upon the art of visual artists (Alison and Kirsten Aune), code artists (Pete Willemsen and Logan Sales), Dancers (Linnéa Ilene Hinkel, Cathy Podeszwa, Rob Wittig and others), and text contributors via Twitter and Google Forms. To respond to such a collective, we three scholars offer a collective dive. Our collaboration illuminates how emerging knowledge from environmental humanities informs electronic literature.

As a Scalar book, the piece of collaborative critical and creative scholarship offers paths or flows for readers to traverse as they navigate the waters of the piece. Our paths include contextualizing information about the piece, the FISHNET Fundamentals and Fellow Fish, or related works of electronic literature. These paths also pursue five main themes or tropes: Hybridity; Sub/Immersion; Silhouettes; Movements and Dance; and Processes, Systems, and Code. Additional paths explore the myths of Mermaids, Little and Otherwise; Underwater (Digitized) Paper Cutting; and the code of the piece itself. Like a mermaid in the water, the reader is invited to swim from path to path and, of course, make new connections.

Mark C. Marino From immersion in sound and image in Char Davies’ Osmose (1995) and Ephémère (1998) to immersion in a downpour of letters in Romy Achituv and Camille Utterback’s “Text Rain” (2000) to immersion in a sea of text in Stephanie Strickland and Nick Montfort’s “Sea and Spar Between” (2010), artists of electronic literature have plunged readers into virtual oceans. Mark takes a deep dive into the Processing code to explore the ways “FISHNETSTOCKINGS” immerses its participants in tides of gender, hybridity, and fantasy. On his reading, Mark uses the methods of Critical Code Studies to swim through the code of the work.

Diana Leong From Josiah Wedgewood’s abolitionist medallion to artist Kara Walker’s cut-paper installations, the silhouette has occupied a singular place within the iconography of slavery and its afterlife. This style of illustration operates within the dynamics of racial fetishism as it attempts to resolve tensions between the universal (e.g., racial blackness) and the particular (e.g., black bodies). Diana examines how “FISHNETSTOCKINGS” evokes a similar dynamic by staging the oceanic entanglements between depth (e.g., immersion) and surface (e.g., silhouette) as a complement to the universal and particular. In mapping these entanglements onto the mermaid’s multiple forms of liminality, the mermaid emerges as a symbol of racial fetishism.

Jessica Pressman explores the role of mermaids as poetic symbol and formal device in literature. She is working on a larger book project on this topic, and this Scalar book offers her an opportunity to explore how the presence of mermaids portends transformations in literature’s media, signifying change in the materiality of literary production and reception. “FISHNETSTOCKINGS” invites a dive deep into consideration of mermaid narratives via electronic literature.

Diana Leong is an Assistant Professor of English and Comparative Literature at San Diego State University. Her research interests include environmental justice, black literature and studies, and the environmental humanities. She is currently completing a monograph, Against Wind and Tide: Toward a Slave Ship Ecology, that theorizes the slave ship as a site for the convergence of environmental justice and abolitionism. Her work has also appeared in ISLE, Catalyst, Electronic Book Review, Configurations, and the Palgrave Handbook of Animals and Literature.

Mark C. Marino is a writer and scholar of electronic literature. With Rob Wittig, he is a co-founder of Meanwhile… Netprov Studios. His work includes Salt Immortal Sea (with Joellyn Rock and John T. Murray) and Mrs. Wobbles and the Tangerine House. He was co-author of 10 PRINT CHR$(205.5+RND(1)); : GOTO 10 (MIT, 2013) and was a collaborator with Jessica Pressman and Jeremy Douglass on Reading Project: A Collaborative Analysis of William Poundstone's Project for Tachistoscope {Bottomless Pit} (Iowa Press, 2015). His latest book, Critical Code Studies, was just published by MIT Press. Mark is also the Director of Communication of the Electronic Literature Organization. He teaches writing at the University of Southern California where he directs the Humanities and Critical Code Studies Lab. markcmarino.com | @markcmarino