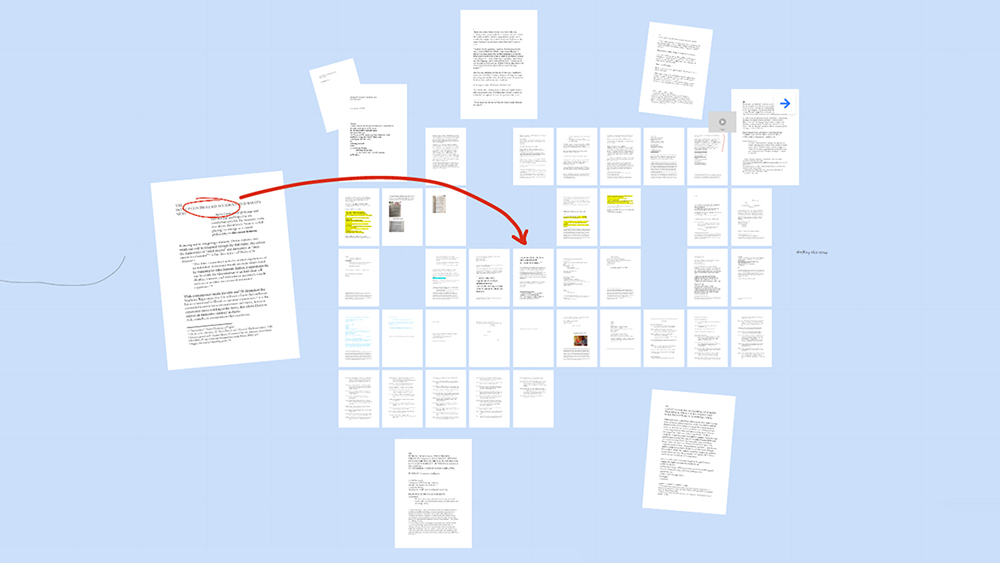 writing With words that don’t exist

A presence stands on a hill by the sea. She tries to sing, tries to speak, but she can only hold her story like a memory in her body and look out at the ocean. She wonders what to do when writing it feels like singing a song with words that don’t exist.

With words that don’t exist has been my attempt to access and articulate this story through imaginative writing spaces in Virtual Reality. In creating and moving through virtual spaces for writing and editing, I investigate how VR’s affordances for embodied and spatial engagement support, or disrupt, the kind of writing—at once physical and virtual, archival and performative—demanded by this story by the sea. Importantly, the ‘outcome’ of With words is not a VR rendering of a story. Rather, the work subverts expected uses of such technologies and reimagines VR as a space for developing narratives that maybe can’t be told, only held.

So far, With words has realized its explorations—narrative, critical, conceptual—as a poetic script, a speculative platform and a theatricalized working process. Each of these outcomes exploits the conceptual and technological virtualities of writing, narrative, character and memory to wonder what else a story can be when telling it feels like singing a song with words that don’t exist. In writing With words that don’t exist, I recall this development, drifting in and out of contact with autofiction practices, narrative musings and new media discourse to reflect on how digital, immersive technologies like VR have mediated my writing of With words.

I look out at the ocean and feel,
(The wind gathers around me) the
feeling of land on the other side.
Someone standing there as I am now,
or was, looks back,
and I feel her and where she would be.
Like the character from a story that
I can’t quite place, and
I wonder if it even exists at all. Except
I remember the story as if a memory of my own life or what I wished,
and she stands on the other side of this ocean between.

I.
There was a time when I stood on a hill by the sea. Holding a story in my body like a memory, unable to find the words to tell it. I tried to sing, tried to speak—or I could only imagine that I did. I could only look out at the ocean between me and these words that didn’t seem to exist.

“English, strictly speaking, is not my first language by the way,” writes poet Claire-Louise Bennet. “I haven’t yet discovered what my first language is so for the time being I use English words in order to say things. I expect I will always have to do it that way; regrettably I don’t think my first language can be written down at all. I’m not sure it can be made external you see. I think it has to stay where it is; simmering in the elastic gloom betwixt my flickering organs.”Footnotes:(I am struck by the resonance and articulation of this line in Pond by Claire-Louise Bennett, (New York: Riverhead Book, 2015): p.41.)

But you see, standing on this hill by the sea, I wanted to touch the color blue. I wanted to move through my pages of writing and see the other side of my words. I wanted to hold my story and let my story hold me.

So I began to write With words that don’t exist.

I am a writer whose writing wants to be physical and virtual, archival and performative, even impossibly visual. My background in film and digital storytelling may not be entirely responsible for these writing instincts, but it has cultivated in me a dissatisfaction with the constraints of more “traditional” writing methods—typing in my laptop’s linear word processor, handwriting with pen on paper, etc. So, for my wonderings about this hill by the sea, I turned to Virtual Reality and its affordances for more embodied and spatial engagement in order to explore how developing a story through an immersive, digital platform might celebrate, challenge and expand my writing. I hoped that creating a more dynamic and full-body environment would allow me to access the story embedded in my imagined memories.

Importantly, I never intended to present With words as a work of VR. Though VR, surprisingly, presented itself as the quickest route to immersive writing for me as an author at the time, I envisioned that my investigations would result in a narrative book or script—something with a clear method of access for potential readers that looked like it had been produced through a more traditional writing process. I approached VR as a development rather than presentation tool—as a space reimagined for writing stories that maybe can’t be told, only held.

As I generated my VR spaces (created using the drawing application Tilt Brush), my writing became increasingly performative, multidimensional and wound up in a distinct (meta) narrative feeling. I found myself facing up to my pages of text and confronting my words in a present and physical way. Even as I could virtually walk through my words, I felt myself approaching something—a narrative structure, a plot or character—that I couldn’t quite put my mouth around. I attempted to capture these feelings on the page upon stepping out of VR and, in doing so, developed my story out of a sort of a dance with more “analogue” methods of writing. In other words (the kind of words explored further in this text), my approach was inspired by the playful choreography of Maya Deren and became Heraclitan—became fragmentary musings to be reread, retraced, revisitedFootnotes:(Daniel W. Graham, "Heraclitus," ed. Edward N. Zalta, The Stanford Encyclopedia of Philosophy, (Fall 2015): https://plato.stanford.edu/archives/fall2015/entries/heraclitus/ (accessed 14 January 2019). )—with echoes of Daniela Cascella “rummaging through hidden writings” at the edge of the abyss.Footnotes:( Daniela Cascella, En Abîme: Listening, Reading, Writing. An Archival Fiction, (Winchester: Zero Books, 2012). ) At times, I even resonated with Briony Tallis of AtonementFootnotes:( Atonement, dir: Joe Wright, 2007, based on the novel Atonement by Ian McEwan, (New York: Anchor Books, 2001). ) writing herself into existence and off the page, in a time within time.

What has since emerged from my writing in VR are a poetic script, a speculative platform and a theatricalized working process. These outcomes exploit the conceptual and technological virtualities of writing, narrative, character and memory to wonder what else a story can be when telling it feels like singing a song with words that don’t exist. writing With words that don’t exist recalls this development, drifting in and out of contact with the autofiction practices, narrative musings and new media discourse that inspired my practice.

Here, I present writing With words using the online, whiteboard application, Miro. Not only does Miro suggest the virtual, multidimensional writing spaces that I created in VR, it has also emerged in my writing practice in its own right as a storytelling, performative process tool. Through Miro, VR and other virtual platforms, I continue to explore With words that don’t exist as part of my circus of writing.

Olivia Powell is a writer, artist and director who wonders what else stories can be and do. Embracing a poetic sensibility, she experiments across narrative forms and creates works described as “the bedtime stories that we forgot to tell.” Olivia has a background in film & media, an MA in digital storytelling from the Royal College of Art and a passion for exploring story development processes that are experimental, instinctual, imaginative and accessible. In 2020, her co-devised short film, M.A.R.Y., made the Lumen Prize shortlist, and in 2021, With words that don’t exist was featured at the VoxLab theatre residency.