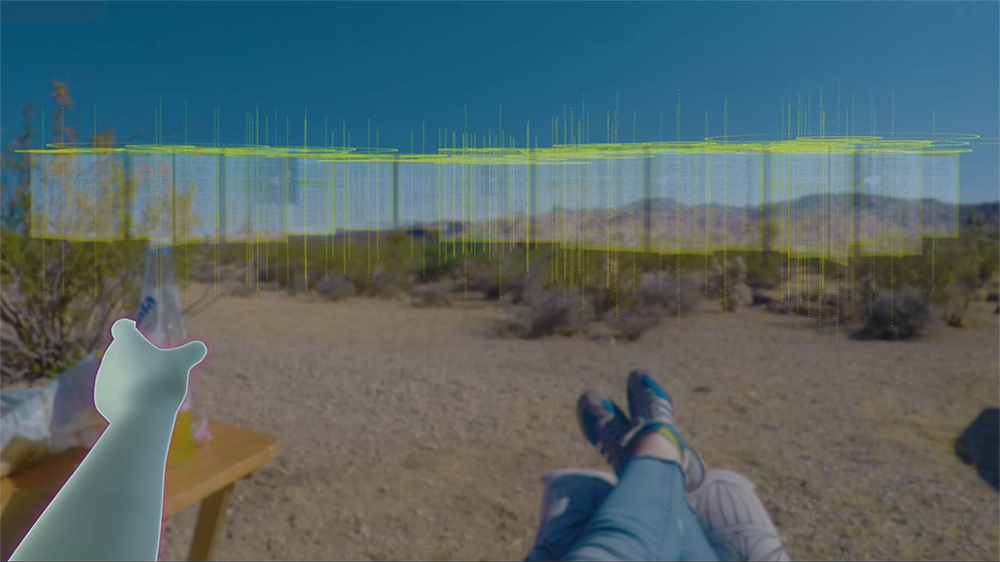 Trina is a 60-frame graphic story that blends speculative software and literary figuring to consider the perils and potentials of near-future interpretative practices. Merging critical design and speculative fiction, Trina is a transmedia work originally conceived as a 20-minute live performance that combined a reading + a slide show + electronic sound (think: PechaKucha meets La Jetée). For this special issue, Trina has been remediated for the web using the affordances of Stepworks, an authoring platform created by Erik Loyer for building multimedia compositions for live, pre-recorded, and interactive performances.

Trina envisions the mixed reality world of the titular character, a former literary scholar who works alone in an RV in the desert, sometime in the near future. Through Trina’s eyes we see the digitally-mediated daily reality within which she must interpret a cryptic, typewritten document as part of a text analysis H.I.T. (human intelligence task) that she takes on to make ends meet. Trina’s dark humor offsets the precarity of her work for Humanitas, Inc., a service that deciphers texts for military intelligence. Humanitas owns Trina’s digital eyes and fingers, a trade-off she made for access to the cloud.

In the story’s collaged photo-graphics, text, image, and environment become one. We read/watch through Trina’s interfaces as she traverses the sexual politics of typewriters and guns, Left Bank literary expats, and the personnel files of E. Remington & Sons, interrupted by perfunctory sessions with an AI therapist and bio breaks. But it is only when Trina assumes the hands of Ida Wayne, one of the first typewriters (as female secretaries were once called), that the hidden meaning of the inscrutable document comes into view, upending Trina’s tenuous existence.

In this version of Trina, the affect and improvisation of a live performance has been replaced with reader interaction that controls the pacing of the linear narrative, a key feature of Stepworks. Loyer has described his platform as “writing with time” in which “the screen is speaking,” concepts that fit a Pecha-Kucha-story told through interfaces for reading and writing. Here, tapping on the keyboard implicates the reader in the story’s action, triggering looping sounds (also designed by Loyer), and adding even more layers to the work’s voices and perspectives.

Dr. Anne Burdick is a designer, scholar, and founder of the Knowledge Design Lab at University of Technology Sydney. Her projects include the digital edition of the New Variorum Shakespeare (2021) with CoDHR at Texas A&M ; Digital_Humanities (2012), with Johanna Drucker, Peter Lunenfeld, Todd Presner, and Jeffrey Schnapp; and Writing Machines (2002) with N. Katherine Hayles. Burdick was design editor of electronic book review from 1997-2012.