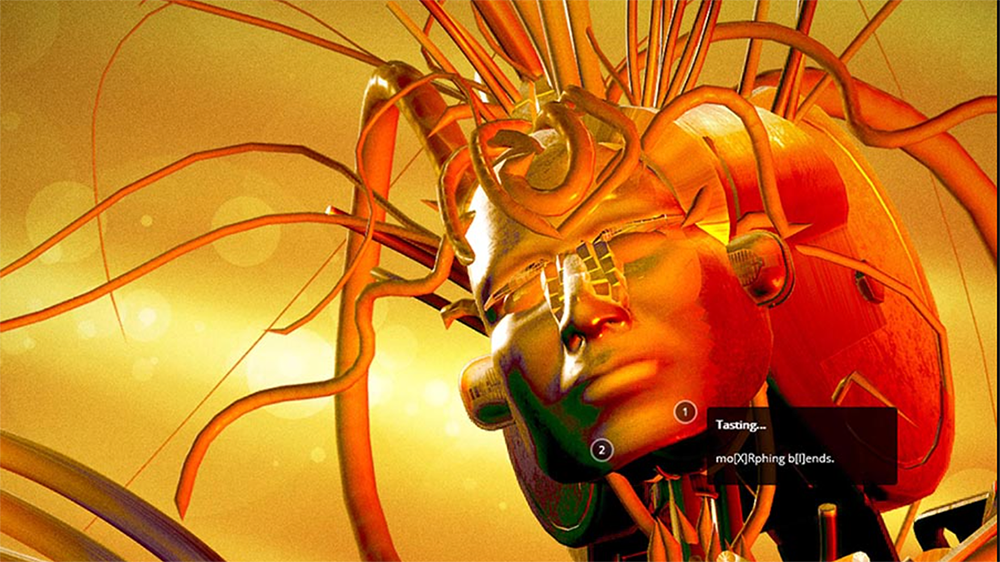 Back in the recesses of the 1990’s, an early Virtual Reality project [based on a version of VR technology called VRML] lay percolating. Named Bodyssey, this project sat fermenting in the minds [and emails] of myself and one of my then collaborators, a talented experimental artist called Gary Zebington. The aim of this VRML-centred project was to:

"explore the notion of a language-induced freedom of body form through the use of speech-recognition, text, and VRML effigies. Intimate relations between interactive human body symbols, speech, text and images will mix (within the parameters of high-technology and Artificial Life) so that the effigies' VRML bodies and verbal utterances will evolve to express a spectrum of emotions.

Although this project never eventuated in the particular form we envisioned, it would set the stage for many of my projects produced from then onwards, works that morph and blend interactive storyforms in unexpected ways through a mix of 3D/VR, Extended Reality [XR] and other Spatial Computing technologies.

Creative writing in XR [aka Extended Reality: an umbrella term that covers Augmented Reality, Virtual Reality, and Mixed Reality] is an exciting creative format that falls under the umbrella of Electronic Literature/Eliterature. Positioning the real/non-real as categories aligning either with the Geophysical [our idea of reality] or the Synthetic [Extended Reality including VR and AR] is a largely binary distinction that [like many mirrored polarisations] slowly finds itself dissolving in the conceptual mouths and minds of many, especially those devoted to the creation of Electronic Literature. Theorist Paul Milgram suggested the Reality-Virtuality Continuum as a type of linear reality scale where at one end lies Geophysically-dependent Reality [‘The Real Environment’] with the opposite end housing the Virtual. Continuing to pursue my VR fascination [and corresponding creative works] I wrote about this Continuum in 2008 as part of the Augmentology Project, where I reworked aspects of the Continuum towards a more contemporised version:

This reimagined version of the RV-Continuum has helped shape several award-winning projects I’ve been working on since 2008, including works such as the VR Adventure Perpetual Nomads, and the experimental 3D/XR Literature works Our Cupidity Coda, A Place Called Ormalcy, V[R]ignettes: A Microstory Series and the XR Story Series V[R]erses.

XR can expand contemporary reality-versions with amazing potentials to enhance entertainment, education, social connection, and other manifestations that lie squarely in the imaginary realm [for instance, taking the form of an adventurous young adult woman in Perpetual Nomads dealing with nefarious greenwashing corporations and debunking associated conspiracies, or navigating through the multi-authored XR Series in the VR app V[R]erses]. As an audience, there’s massive potential for experiential drenching through XR. My current creative focus channels and crinkles such XR platforms and programs in ways to create projects that [I hope!] flex and story-shine.

What is the current state of the practicalities of VR, AR and XR: is the X in XR blossoming and blooming, or are we just at the promise stage of a functional XR wave? Is XR Literature really here yet? Or are we stuck in a perpetual cosine wav[e]ing where issues of expense, hardware limitations [like field of view restrictions, the screen door effect] accessibility, fragmentation, resolution bounds making text difficult to read, and health concerns all come into play? We could compare the state of XR with the notion of the Uncanny Valley: where instead of it being applied to artificial humanoid representation [where the closer an avatar or robot or android gets to looking and moving like a human, the more distasteful we find the fact they’re not quite “real”], it’s applied to simulated environmental spaces/contexts. When deeply gripped in a reality state dependent on the use of high-end [or true] VR gear where a user is effectively disconnected from the [so-called] real world in a dissociative-esque state that can be harnessed to great effect in terms of Eliterature creation, there’s massive potential to get under an audience’s skin, to develop VR experiences that challenge prevailing orthodoxies. What I attempt to do with works like A Place Called Ormalcy is slip under a user’s radar by offering up an allegory that could be read/experienced as a simplistic, almost naïve plot, that has social commentary at its core and spatial exploration at its heart.

Unfortunately, until resolution on affordable [as opposed to high-end] headsets improves, clarity regarding text absorption in XR Literature is an issue [even with my attempts to compensate for this: Perpetual Nomads was created with layered accessibility options in mind with these options manifesting through different incarnations of the project designed to run on high-end VR setups as well as able to be experienced in a full 23 minute 360 video version]. A Place Called Ormalcy takes this in a different direction through the use of WebXR: each chapter can be read as plain text, experienced as 3D tableaus [with text] on mobile phones or desktop PCs, or as full-blown VR chapters using low or high end [or tethered or non-tethered] gear with text annotations fully accessible in the VR space.

Is the future of XR Literature a panopticon-level Hydra-headed beastie? With current XR industry leaders [Vive and Facebook’s] constant capitalistic jostling for user adoption/stickiness over the past 5 years, Vive’s recent shift towards enterprise-loaded gear/platforming, and Facebook acquired-smothering of Oculus, there's been many questions in XR circles over the retention of headset-generated data. Issues squarely centring on Facebook’s push to conquer the XR space include a lack of transparency regarding how user data is used [including sensitive metrics to do with body/haptic monitoring and voice recording] and who is allowed access to it. Considering Facebook’s responses to Oculus-centric issues involving monopoly siloing, data capturing [and potential draconian monitoring] plus concerns from Oculus users having to deal with absent/sporadic user support and unusable Rift headsets, or the health issues [face rash, anyone?] with their Quest 2 rollout, or their recent proclamation of their intention of corner-conquering the Metaverse, there seems just cause to worry about a XR Literature future. In short: be careful what systems, cycles and enterprises you support through the very act of creating [I ceased using Oculus products and platforms back in 2017].

On a more positively-centred flipside, is it viable to consider an Utopian future for XR Lit in general? Unless we seriously [and urgently] act on the extant climate emergency [and adjacent problems like the Covid pandemic] our planetary future looks generally bleak: a future falling on the Utopic side [including the production of XR Lit] depends on how the underlying mechanisms of societal orientation and worldwide institutional-based governance unfold. Like any tech, XR can be used to enhance or detract the human [and non-human oriented] condition: choosing to settle on a fairly holistic viewpoint, I envisage that XR Literature will continue to play a significant part in my [and hopefully others] production of Electronic Literature in a world that rises to meet the concerns we face as a species whilst acknowledging our role within our ecosphere.