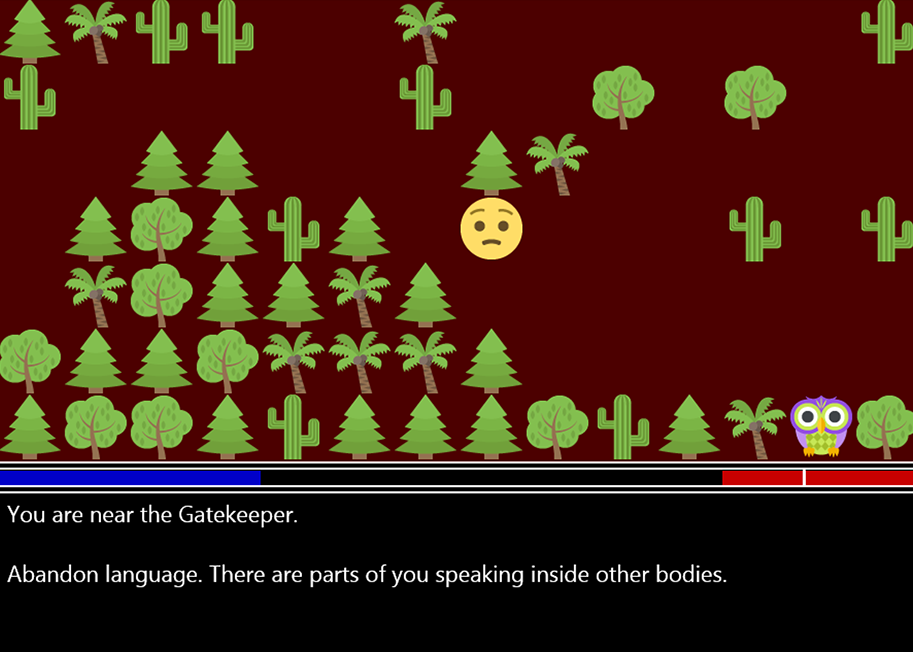 The Gate: a game-essay on coexistence and spectrality in the Anthropocene

'The gate' is a game-essay about the Anthropocene. As many other games, it has characters, a plot, a set of tasks to be solved, a set of deadly dangers, and is situated in a particular spatiotemporal setting: in this case, a dying forest somewhere on planet Earth, in a not-too-distant future. Conceptually, 'The gate' reflects upon the notions of coexistence and spectrality in a collapsing world-scenario. In this game-essay, these two concepts are considered as viable principles for negotiating the complexities of the Anthropocene predicament. However, unlike most essays written in traditional form, where intentions and guiding questions are laid out at the very beginning, the crucial question of 'The gate' is posited only after the game has been completed, that is, when the reader/player has accomplished a certain number of tasks without dying in the attempt. It is only at the very end of the game when the central thesis of 'The gate' is revealed, thereby shedding light on the significance of the trials whose accomplishment led to the game's completion. Thus, this game-essay operates in a reverse and multilineal fashion, and reaching its conclusion depends solely on the ability – and luck – of the reader/player, who must keep her avatar alive through dangers such as murderous creatures or hostile weather. However, even the unsuccessful endings of the game are an essential part of the essay. The different possible deaths of the game-essay's main character (that is, the reader/player's avatar) also convey significant aspects of the conceptual construction of 'The gate'.

The theoretical basis of 'The gate' draws from Donna Haraway's suggestion that, in order to 'stay with the trouble' in the Anthropocene, we must learn to coexist and form all kinds of allegiances with the most unlikely non-human creatures. But how can these bonds be forged, if the languages spoken by these beings are fundamentally strange and inaccessible to us? All the creatures in 'The gate' exist in a spectral plane, modeled after the writings of philosopher Timothy Morton and novelist Antoine Volodine. In this plane, beings are spectres, since they are neither dead nor alive: a quality forced upon us all by the imminence of catastrophes such as mass extinction and global warming. But how does the liminal condition of not-quite-being alive and not-yet-being dead affect a basic instinct such as survival, an imperative for completing 'The gate'? Finally, both radical coexistence, imagined as the act of becoming-other, and spectrality, are understood here as core traits of shamanism (through the writings of Mircea Eliade), which acts as an invisible thread that binds together the narrative elements of 'The gate'.


A brief note about the game-essay

If an essay is essentially a trial, an act of weighing and balancing a certain kind of conceptual matter, then its outcome is strictly open-ended. If an essay is considered to be a kind of writing in which the author plays experimentally with ideas by submitting them to previously untested procedures, then the act of encoding and rendering an essay as a game is not only a plausible, but perhaps a desirable alternative to its traditional linear form based solely on written language. The historical, linearly written form of the essay could be regarded as a sort of betrayal of its full potentiality: instead of allowing the essay to branch out into the different possible outcomes typical of a trial experience, linearity inevitably guides the reader towards a single, predetermined ending, after having followed a path that will never be different from itself. The traditional essay is a step-by-step development that excludes variation, deviation or even fruitful capitulation. Under this perspective, only a multilinear narrative form, such as a game, would do full justice to the essay's open-ended endeavor. Yet, while the form proposed here, that of the game-essay, does not imply that the form of the traditional essay needs to be discarded in favor of an upgraded, game-based version (for doing so would be an unforgivable and ultimately futile exercise in arrogance), it does explore the essay's historical limitations precisely by attempting to overcome them though the usage of the strategies and dynamics of gaming.

Haraway, Donna (2016). Staying with the Trouble: Making Kin in the Chthulucene. US: Duke University Press

Eugenio Tisselli (b. Mexico City 1972) is a programmer, writer and researcher. As a programmer-writer, he has explored the different ways in which code influences our understanding of the world, and has attempted to write against meaning by focusing on the materiality of language. As a programmer-researcher, he has become engaged with social and environmental issues which have led him to develop platforms for the collaborative creation of community memories. He is a computer scientist, holds a master's degree in digital arts, and has received a PhD from the University of Plymouth after defending his thesis Reciprocal Technologies: Enabling the Reciprocal Exchange of Voice in Small-Scale Farming Communities through the Transformation of Information and Communications Technologies. He has presented his work in multiple conferences, festivals and exhibitions throughout the world. His writing-related work can be read at http://motorhueso.net, and his platform-based research may be accessed at http://ojovoz.net.