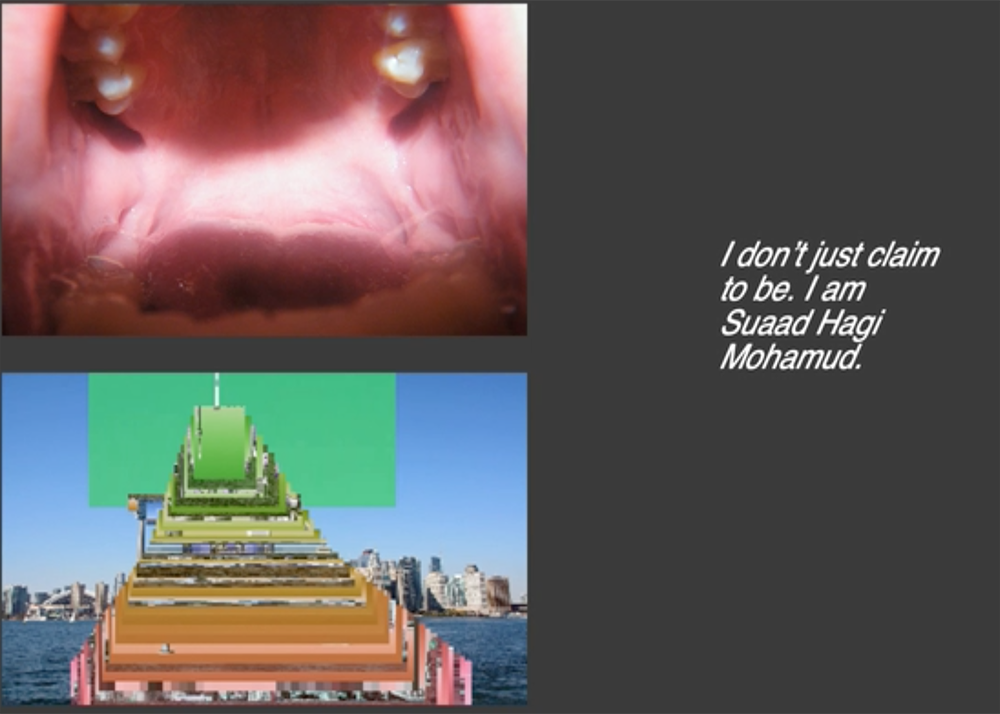 Creative Collaboration, Racial Discrimination and Surveillance in
The Lips are Different

This essay addresses the ideas and approaches involved in the creation of a collaborative multimedia piece, The Lips are Different, by Hazel Smith and Roger Dean. The piece is about the Canadian citizen Suaad Hagi Mohamud — born in Somalia — who was accused of not being a Canadian citizen when she tried to return to Canada from Kenya in 2009. The work links over-surveillance, racial discrimination, photography, media representation and issues of identity. It comprises real-time video written in Jitter; improvised music based on a comprovisation score; and performed text presented both acoustically and as video image.

The essay illuminates the process of making the The Lips are Different, and the collaborative methods involved in constructing and presenting it. It demonstrates the reciprocal relationship between research and creative development that underpins the piece. As part of this continuing relationship between research and creative work, Roger Dean has used machine learning to generate new text for this essay. This text generation, which appears in the right-hand column, resulted from evolving computational deep learning models.

Hazel Smith is a poet, performer and new media artist. She was a Research Professor from 2007 to 2017 at Western Sydney University, where she is now an Emeritus Professor. She is author of several academic and pedagogical texts including most recently The Contemporary Literature-Music Relationship: intermedia, voice, technology, cross-cultural exchange, Routledge, 2016. She has published four volumes of poetry including The Erotics of Geography: poetry, performance texts, new media works, Tinfish Press, Kaneohe, Hawaii, 2008, with accompanying CD Rom, and Word Migrants, Giramondo, 2016. She has also published three CDs of poetry and performance work and numerous collaborative multimedia works. She is a member of austraLYSIS, the sound and intermedia arts group, and has performed, broadcast and presented her work extensively internationally. In 2018, her multimedia collaboration with Will Luers and Roger Dean, novelling, was awarded 1st Place in the Electronic Literature Organisation’s Robert Coover Award.

Roger Dean is a composer/improviser, and since 2007 a research professor in music cognition and computation at the MARCS Institute, Western Sydney University. He founded and directs the ensemble austraLYSIS, which has performed in thirty countries. He has performed as bassist and pianist in contexts from the Academy of Ancient Music and the Australian Chamber Orchestra to the London Sinfonietta and the Hoarded Dreams Jazz Orchestra. His improvising collaborators include Ted Curson, Derek Bailey, Evan Parker, Sandy Evans and Oren Ambarchi. Improvisation and computer-interaction merge in his MultiPiano Event, a solo performance exploiting live piano, real-time audio processing, generative physical synthesis piano, and electroacoustic sound. His creative work is on 50 commercial audio CDs, and he has released many digital intermedia and installation pieces, including novelling, with Will Luers and Hazel Smith, which won the international Robert Coover Award in 2018. His 400 substantive research publications include 8 humanities books. Previously he was CEO of the Heart Research Institute, Sydney, researching in biochemistry, and then Vice-Chancellor and President of the University of Canberra.