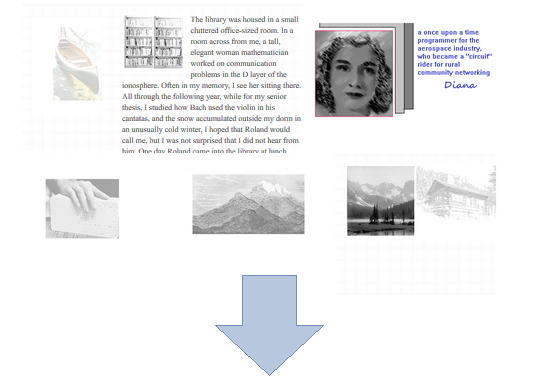 Since 2009, informal online writer’s notebooks have been an integral part of my process of creating electronic literature. Encompassing ten weeks of writer’s notebook selections (from November 5-6, 2017 to January 6, 2018) and introduced with this essay that briefly explores how online writer's notebooks function in my work, “Arriving Simultaneously: Selections from a Writer's Notebook" is a collection of writer's notebook entries that document the creation of the electronic manuscript, Arriving Simultaneously on Multiple Far-flung Systems.

Beginning in 2009, when I was creating Paths of Memory and Painting, parallel writing in online notebooks has become an important component of my practice as a creative writer/coder. Because in the process of housing words in algorithmic structures, artists and writers who work with art and technology struggle on two fronts, writing about such struggles allows an ordered progression through the process of creative coding and writing.

Initially, I was searching for a way to document background research and related explorations, without intruding on the work itself. Additionally, it had become apparent that my offline writer's notebooks (although some are works of art in themselves) were haphazard, often containing scrawled notes about the creation of world models, stray code for authoring systems, and undecipherable drawings of evolving interfaces - interspersed with details of life, such as uncompleted “to do” lists and telephone numbers of friends and acquaintances.

When I began to create online writer's notebooks, it was immediately clear that comprehensive documentation was forced by the knowledge that what I was writing would be seen by an audience. Thus, the online writer's notebook process was not only helpful in the development of works of electronic literature but also served as organized documentation of the research, writing, and software engineering that shaped the creation of these works.

Because of a background in handmade artists books, I wanted to retain something of the look and feel of the hands-on creative process. Thus, I chose to hand HTML/CSS my notebooks instead of using a blog authoring platform such as WordPress. Thanks to years of writing HTML when I was working for Arts Wire in the early days of the World Wide Web, I was fluent in this medium.

As my process of creating online writer's notebooks evolved, I found that when I was unsure of what decision to make in the unexplored gap between writing and coding, writing in my notebook forced a confrontation. And in the process, I saw my own life as an artist/writer/coder more clearly.

Beginning with punch cards, a punch card reader, an IBM 1130 computer, FORTRAN, and space exploration in the late 1960's, Arriving Simultaneously on Multiple Far-Flung Systems is a virtual reading machine, created/recreated with JavaScript in a HTML/CSS structure and read on-the-fly. The narrative unfolds along paths that each reader chooses, but because the paths themselves are aleatory, the way that computer mediation controls the random production of texts echoes the uncontrollable situations and technological shifts that shaped the life of a woman programmer, from 1968 - 2006.

However, earlier notebook entries are of interest. For instance, on September 3, 2017, in preparation for the writing and coding of Arriving Simultaneously, I reviewed my process of creating aleatory works:

To arrive at phrases that combine in various ways, I need to begin with what might be remembered. The process follows the card catalogs I created beginning [in] the 1970's, where the whole had collective meaning, but each unit had meaning by itself. The process is clear in File 3 of Uncle Roger. Memories occur one after another but are seldom sequential in a traditional fiction sense.

And, reviewing the environment in which my authoring systems for electronic literature evolved, I returned to the mid 1980's:

When I first saw Michael Joyce's afternoon, I thought it flowed more smoothly than Uncle Roger. In my work, I composed each unit of text as standing by itself and [was] also capable of being combined with any other lexia. When I looked at afternoon, I questioned my approach, but this quality of unpredictably generated lexias is partially what distinguishes my writing, so I kept to my vision while at the same time I admired how Michael wrote.

In conclusion, as I post at the opening of each notebook:

A writer's notebook is not a final paper but rather reflects the development of a work or series of works. In the informal, recursive, yet productive practice of creating notebooks online, ideas and sources are developed and slowly emerge.

---. Paths of Memory and Painting, Part 2 of difference that a small amount of blue. https://people.well.com/user/jmalloy/luminous_landscape/paths.html

Judy Malloy followed a vision of experimental narrative, that she began in the 1970's with card catalog and electro-mechanical structures, and in 1986 she wrote/programmed the ground-breaking hyperfiction Uncle Roger. In the ensuing years, she created a series of electronic manuscripts, including its name was Penelope, called one of the early classics of electronic literature by Robert Coover. Recently, her playable manuscript Arriving Simultaneously was short-listed for the best 2018 work of electronic literature. She has been artist-in-residence at Xerox PARC and a distinguished fellow at Princeton and is currently Lecturer at the School of the Art Institute of Chicago.